Thai massager can no longer rest once 100 from both Thai and foreign exhauster line up daily. “Dr. Pen” confirm full plan to impress foreigners. On 20 October 2003, Sudarat Keyuraphan, the former minister of Public Health, stated the solution to problem related to health in the Ministry of Public Heath in the APEC submit at Queen Sirikit National Convention Center. It was duty of the Ministry to participate only in health improvement but also Thai Traditional massage where Thailand Department of Developmental Medicine and Alternative Medicine was assigned to be responsible. Since 12 October 2003, 10 Thai Traditional massager were assigned to offer the foot massage service and share the knowledge about Thai Traditional massage such as how to make a fresh herbal compress, Thai Traditional nutrient based consumption, domestically vegetable for illness remedy, herbal drink service, and body elements.

The Minister of Public Health at that time later added that the report found that the domestic media and the international media increasingly paid attention to Thai Traditional massage service day by day. Many of 883 consisting 554 Thais and 329 foreigners took foot massage since 12-19 October 2003. All of them were satisfied with the service. Dr. Warunee Premgamone a vice president of Thailand Department of Developmental Medicine reported that the media journalists complain about their shoulder pain that she truly understood it caused by prolonged period of carrying camera or wrong seating. These actions caused shoulder muscle cramp. The doctor also came to know from the secretariat that the center had massage services for shoulder and curing compression for the media journalists. There were 17 massagers – exclusively for foot and body services consisting 12 and 5 respectively. The Ministry of Public Health was more than welcome to improve the services to satisfy and suffice the benefits of visitors to Thailand, this time. 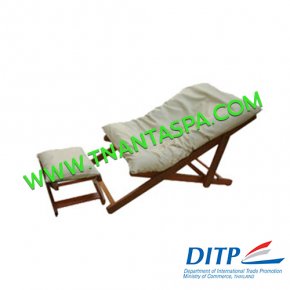